Hats Off to HASOF Whiskey for Honoring Vets

The HASOF Whiskey Company tells it like it is. HASOF = Have A Shot Of Freedom Whiskey. 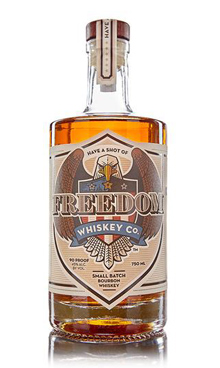 When you do, you’re supporting a 100% veteran-owned company that produces small batch bourbon whiskey it will ship nearly anywhere in the U.S.A.

The concept behind the company grew from camaraderie on a porch””and an inspiring quotation.

After returning from serving in Afghanistan””and many nights of back porch drinking””Zach Hollingsworth and his partners Scott Brown and Giev Fowler set out to fulfill their dream of bottling Freedom bourbon.

A simple quote inspired them: "Marines, enjoy this day! For those who fight to protect it, freedom has a flavor the protected will never know!"

What better way to enjoy the day and the flavor of freedom than creating a drink to honor it?

Once they had their mission, the three defined it: to make a bourbon that was not only smooth, but would invoke a sense of real pride. Partnering with an established distillery in Spring Valley, California, the group created what is today their Freedom small batch bourbon whiskey.

The three partners also agreed on how their company would grow: by employing only veterans and their families.

Dan Peters, a graphic designer from Columbus, Ohio, created the HASOF Whiskey Co.’s label, starting with a logo that features an eagle, covered in a shield, with FREEDOM emblazoned across its chest. 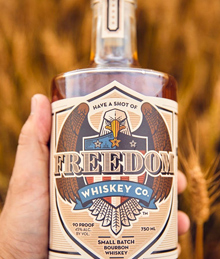 The design was made to embody the strength and pride of the American spirit. The toast on the side of the bottle titled, “Freedom” was written by Zach, to honor those who have paid the ultimate sacrifice for their country.

Such an impressively designed label needed the help of a first-class label maker.

“Our label consultants went above and beyond expectations,” said Hollingsworth,“From keeping us apprised of the label creation timeline, to suggesting embossing and gloss tactile spot varnish, the two were nothing short of amazing.”

The finished product was “not only on time, but professional and first-class quality,” he said.

Customers’ React to the Label

How have customers responded to the look of the finished product?

“They’ve been absolutely blown away by the design and quality of the finished label,” Hollingsworth said.

The HASOF Whiskey team reports that they receive compliments every day on the quality and beauty of their bottle.

“Your company has been an invaluable partner in helping us to a successful launch,” Hollingsworth added. “We look forward to many more years of working together.”

Questions? Our label experts are ready to help point you in the right direction!

We’re ready to send you samples of our wide variety of labels we’ve printed.

Get a detailed printing quote from our sales team on your project today!

Want to be in the know? Want to see what we’ve been up to? Stay in touch and be social with us!